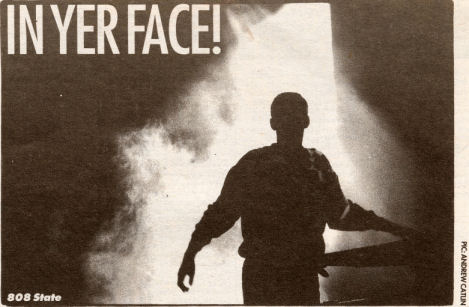 WHAT I would like to see one of these days is one of these purposely-built dance bands cutting free and going full out for it. Hell, heaven knows rock is dead now and all that, and 808 State put on about the best stage show I’ve seen since that delirium opus from Madonna last Autumn, but both 808 and N-Joi are still too rooted in rock tradition, too hidebound by the conventions of the last four decades to attain mythical status yet.

Both bands (collectives? No. And that’s somewhere else they fall astray- I mean, those other chaps you have in your gang may be great blokes and all that, Graham, but aren’t they somewhat limiting?) still resort to the tired old mannerisms of having someone front them. Sure, I love it when that guy waggles his fan round his and, boy, aren’t those keyboard players sexy when they punch the air and blow their klaxons between each segment, but is it really necessary? Aside from such distractions, both the stage-shows of N-Joi (lasers – bright green ones, which splatter their name all over the Academy’s front) and 808 State (lasers – banks and banks of them through which Massey and Pricey stride as if through fields of corn; crystal balls used to scatter effect; cumulus cloudbanks of smoke) are truly hypnotic, the music likewise. And what’s worse is they bring guests on to sing.

Why? The mesmerising pulse and repetitive drone of “Nephatiti” is enough to induce instant paralysis in 95 per cent of the jubilant revellers here, the sensual sweep of the synths on “San Francisco”, by rights, should stop the world in its tracks. Show me just one rock band who’ve ever released three such diversely brilliant singles in a row as “Cubik”, “In Yer Face” and “Ooops” and I’ll show you my resignation (done!-Ed).

So why spoil the effect by introducing human bluster and male braggadocio halfway through the set in the shape of the intensely annoying MC Tunes? I mean, “Tunes Splits The Atom” and “The Only Rhyme That Bites” are certainly wicked tunes, man, but MC Tunes seems determined to fill in every last space of 808’s stroppy backbeat with pointless verbiage impossible to hear. Surely it’s these very spaces and jerky electro-pulses which give 808’s sound its allure? And what’s all this crap air-punching? The KLF is one thing, but this brings to mind no one so much as U2. 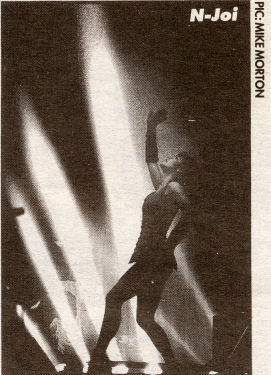 Likewise, with N-Joi. Often they’re very stunning indeed – big, chunky-knit rhythms, gaps you could lead a camel through, but when they introduce she-who-sings-just-like-her-out-of-Black-Box to sing their two chart hits, “Anthem” and “Adrenalin”, plus that other one whose title escapes me right now but sounds identical, they lose it completely and the revelling pretty much stops. And also, unlike 808, they don’t innovate, they merely follow. Otherwise, I see no evidence to refute Paul Lester’s rather grandiose claim that 808 State are now bigger than Jesus. Worship certainly falls their way; whistles blaring, teeth gnashing, everyone lazily wagging their bums and lifting an arm every other second -all those accolades the kids lavish only on those they love the most. The set passed as if in a trance- one-and-a-half hours becomes 90 seconds – and the insistent beat never ceases.

And everyone was participating, raving, dancing till six in the morning! Beat that, you tired old thing called rock’n’roll, you.